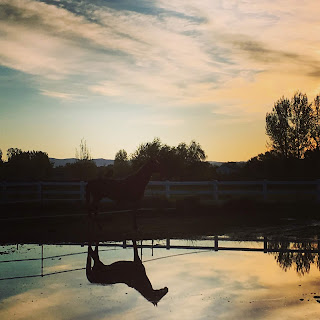 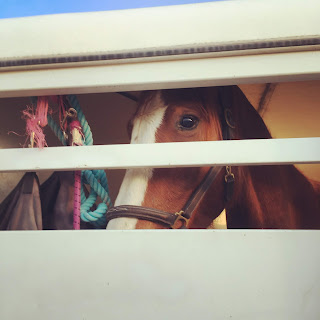 I knew very early on that Z was not a forever horse for me. He had the best brain and I adored him but I knew I ultimately wanted something nicer for dressage. I knew if I wanted to accomplish my dream of becoming the best dressage rider I could I would need to move on from him. I was incredibly lucky in that his perfect home popped out of nowhere. I scrolled through Facebook one evening and saw a friend of mine was in the market for a young warmblood. I reached out to her and she was able to see the lovely young horse through the fuzzy coat and lack of topline. She came out to see him and despite his long winter off of work, she shared the same vision I had for him. She brought him home and they have been absolutely lovely to watch grow together. They work so well as a team and my heart is so full being able to watch their journey together. I have peace knowing he went where he was supposed to go. 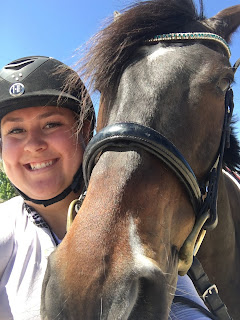 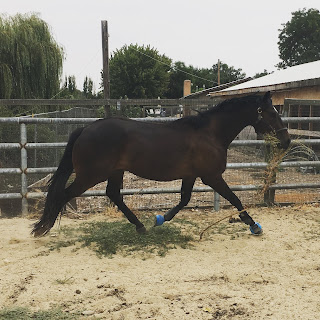 Merlot makes me the saddest. I always felt like the way I found this horse was destiny, but I was just forcing a bad accident (broken foot) into fate. I truly think this was one of the nicest built and moving horses I have ever owned. After Z, I knew I needed to move on from Merlot too. When I first thought about buying him I was riding multiple horses a day and my trainer was generating a new confidence in myself that I didn't naturally have. I have spoke about before how I have a history of fear with horses. But she helped me conquer that. She made me successful on horses I would otherwise never agree to ride. I saw Merlot's greenness as a chance to prove that I was finally a confident rider at heart and I had the determination to take him to his full potential. But when I got him home and I had the opportunity to buy Mae and ride Evita, I realized I didn't have the time or energy to put into four horses. Merlot was really the horse that needed the most consistent work to get over his baggage and as my time slowly slipped away from me, I realized I didn't have the time to put into him. I really thought and still do think he is going to be a spectacular horse. But I was put into a position where I couldn't afford to keep him in full training with the intent to sell. So I gave him back. And now, my heart still hurts. 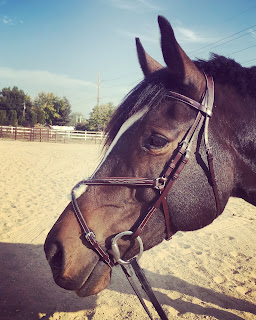 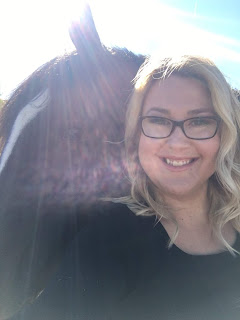 And then I was left with one. I absolutely love Mae. When I first saw her my heart melted. I mean I always thought Merlot was beautiful, but this horse was something else. When I looked at Mae I just dreamed of one day being able to own such a beautiful mare. The opportunity to buy her was my dream come true. This was a beautiful mare that had decent breeding and training. She already had a show record. Her suspensory injury seemed like a speed bump in the road. I wanted to be her forever home. I thought if I couldn't keep her sound enough to ride, I would at least be able to breed her. As I brought her back into work she made it clear that she wasn't quite done healing yet. But at this point I loved her. I figured I would give her a year off and try breeding. I had some money saved up and thought she would really make excellent babies. I tried to breed her unsuccessfully three times. At this point my "splurge" money was well spent and I would have to save up again before I could breed. I really do feel breeders need to be prepared and responsible for any vet bills that can come there way, and even though my breeding was paid for, I didn't have the necessary cushion to continue if something were to go wrong. I wasn't too worried though, I figured I would bring her back into work. I had absolutely adored riding her before. But her baggage came up in full mare glory. After we worked through it, I felt like Amy from Heartland. But then another day and another mare-titude would hit and my confidence was shaken more. After Z and Merlot I knew I would always keep one horse. But I couldn't help but long for a fresh start. A horse like Z with no baggage but was a little fancier. I felt guilty. Here I had a beautiful horse that I had once dreamed of owning and yet I was kind of afraid of her. I was rattled from some past experiences with her and couldn't seem to shake them when I swung my leg over her back. A friend of mine has always expressed interest with her and one day I let go of my emotions and realized I had to be done. Shes been thriving with my friend and I knew I made the right decision.

But even though there were none it didn't have to be the end.