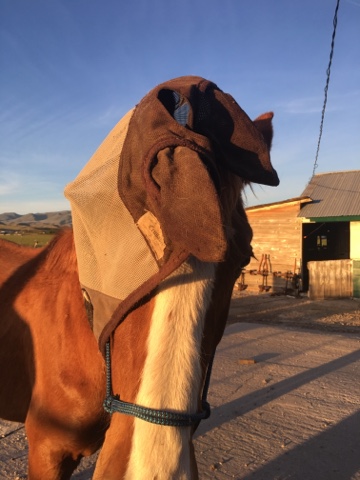 Holy crap does time fly. As much as I want to say I've been partying I've instead been super busy. May leads itself to some major life changes.
1) Decide to take summer classes to expedite my degree
2) Quit my office job of the last 3 ish years 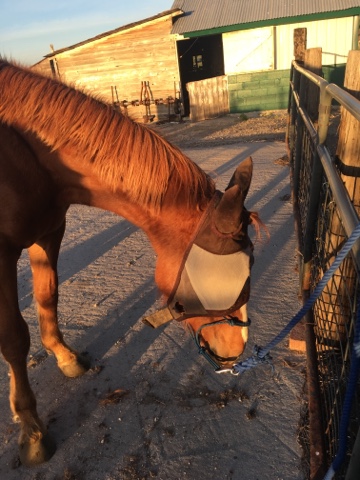 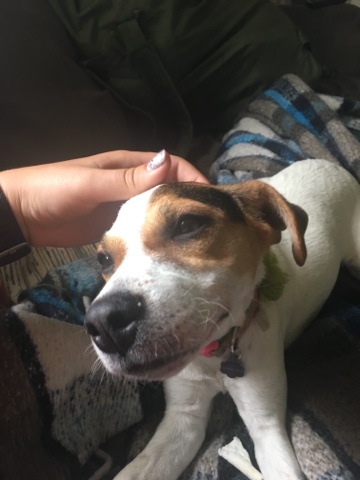 5) Juggle house sitting, working, and taking care of my own farm. So many miles on my car. 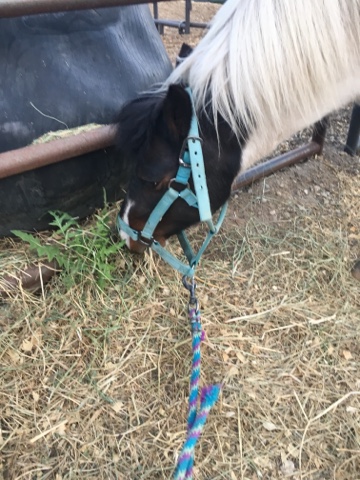 So those are the main bullet points of the last two weeks that Ive unwillingly abandoned my blog. But I'm learning to find time and use up ever part of my day. For example I am writing this in my car at the barn as I am an hour early to ride (work went quicker than planned). 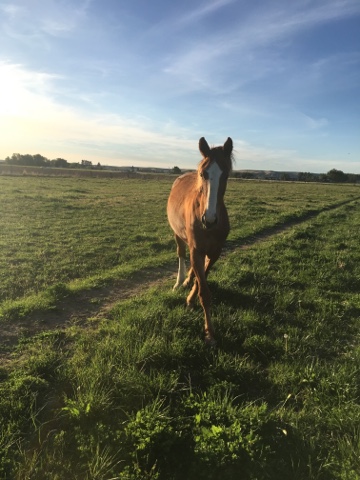 I'm not super stoked about summer classes. Im taking my second Business Statstic class here at the end of the month and it is 5 weeks of 5 days a week 9 am to 11:30 am. Far from the worst thing in the world but when coupled with working at the rescue when I get out of class, my unlimited riding time seems to be cut shorter than I wanted. 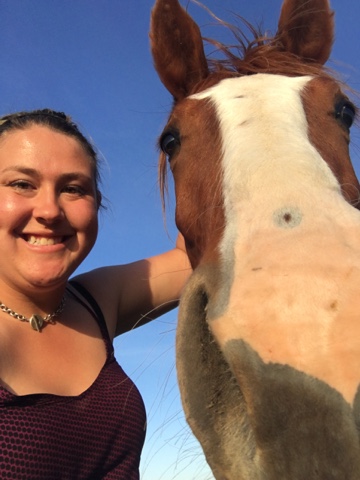 I'll have some more detailed updates and thoughts coming soon!
Posted by Micaylah at 7:43 PM 6 comments:

Semester is over! 9 credits closer to getting my degree! Wohoo!

But I am trying to hustle and summer classes start at the end of the month. Oh well, time to cherish these few weeks of not being guilty that I didn't do my homework! I mean..uhh...SUMMER 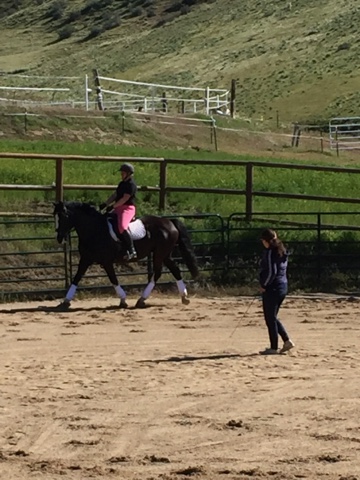 So I was super nervous for my first clinic ever, but it was SO MUCH FUN! And I hurt so bad omg. Here is my short recap from Saturday.

I was scheduled to ride at 10, and because my shit was most definitely not together, I arrived at 8:45 to clean tack and make Evita super presentable. Right after her I was supposed to ride Riesling, but I retired him last week. I didn't want to be out clinic money so I instead decided to ride my mom's horse, Vermont. If you saw my clinic prep post you'll know how confident I felt about this. I was able to have my mom come around 9 am to get him ready so I could just do a quick swap after riding Evita.

I got her looking nearly show ready and hopped on. Danielle vaguely saw me ride Riesling at the show in Jerome, ID two years ago. However, she is very familiar with Evita and I believe showed her and rode her prior to the last owner. She commented that she was disappointed how she lost so much muscling before we got her. Immediately she had me ask for a more forward march and more engagement in the walk while lowering her poll and lifting her shoulders. We moved on to trot work where Danielle had me really work hard on emphasizing E to lift her shoulders and belly and get her working over her back and through her hind end.
We moved on to a little bit of lateral work, which E excels at. Danielle was aware of the last owner having issues with changes and knew that when I started cantering her when I first started leasing her she was very on the forehand and plowed into the ground.

We worked on some exercises to get her to fill up my outside rein and have her body supple before asking for the canter. While I didn't feel as prepared for the transition as I do when I lesson with CJ, I followed her instructions to canter and it was surprisingly not the train wreck I expected with the not perfect transition. 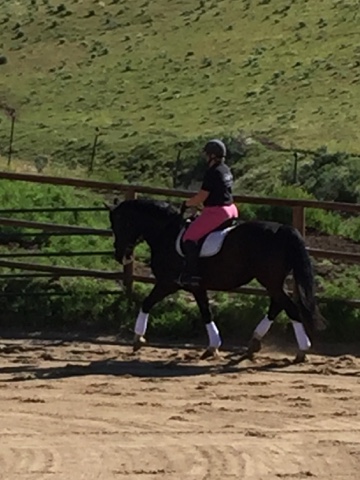 E gets super stiff in her body at the canter and doesn't push from behind. We worked on getting her to stay connected, have bend in her ribcage, and take a bigger stride. Interestingly, when I first started riding her she would nearly run away with me at the canter. The past few weeks however she has been prone to breaking. I was told this is because it is hard for her to use her body and carry herself.
We ended the lesson when E wouldn't break and maintained bend and lightness in her mouth. It took a lot of work from me to keep her together and she was quite tired but still wanted to try really hard for me. We were both exhausted but felt pretty accomplished. I jumped off E and handed her to my trainer to hand walk her in the upper arena and immediately jumped on Vermont.

Mind you, this was Vermont's second ride this year. He is incredibly crooked and tense since his last ride was before I broke my foot last year. Luckily, Danielle also had him in her barn for two ish months when his old owners tried to sell him and before I scooped him up for the stellar deal. 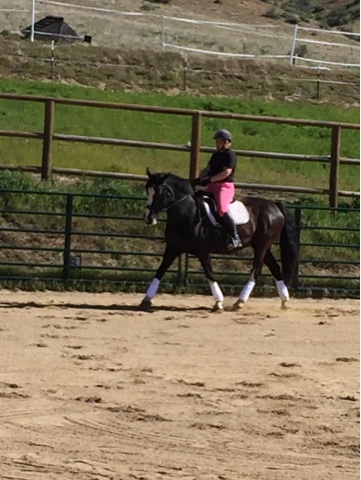 We agreed that he is extremely out of shape and is trying to hard because he has no confidence in himself. We only walked and trotted and focused on forward and straight. When he was straight and seeking the connection he got rewarded heavily. He seemed to remember what this whole riding thing was all about and started to settle down. For whatever reason (needs chiropractor tbh), when we go for a downward transition he throws his haunches to the left.

We spent nearly the entire lesson working on transitions. When the trot was straight and forward we would slow it down until he started to throw his haunches left (almost to a walk). It was a slow and probably extremely boring lesson to watch but near the end we did almost get a straight transition.
To break up the transitions, in the middle of the lesson we introduced some poles. There was just two widely set at an unrelated distance. The goal was to keep him engaged and happy and straight over the poles. He perked up a lot at the poles and nearly tried jumping them the first time through. Quickly we got forward, straight, connected, and a steady tempo. We rewarded him heavily.

We moved back to transitions to end the lesson and he was starting to gain more confidence and remain straight. Compared to how stiff and tight he felt when I first got on, his back was swinging and he was happily relaxed at the end. I was super proud of him.

CJ's property is situated in the foothills and there is a nice incline on the sides of the areans. Danielle wanted me to get both horses fitness up by walking the hill a few times a day. After my lesson on Vermont, Danielle had me take him up the hill. 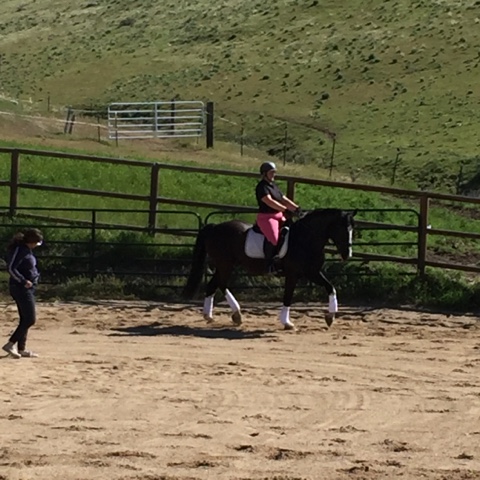 Remember, unconfident, underfit TB who can be silly? Yeah here he came to the party. Walking up was NBD but walking down the hill he couldn't go straight and wanted to side step because he is weak. This defeated the whole purpose so I pushed him to stay straight and he realized it was too hard and his brain started leaving. He was threatening to rear and just overall couldn't horse. Thank god CJ came to my rescue and ponied us up and back down the hill. I'll be leading him up and down the hill until he decides it is NBD then I'll try under saddle again. Don't want to die.

By this point it had been nearly 3 hours since I first got on Evita. I was exhausted and tired. Luckily my mom was there and helped me liniment the horses and put them away. Holy crap had I just got my butt kicked, but honestly it was really fun and rewarding!
Posted by Micaylah at 8:28 AM 8 comments: